The History of the Trumpet Mouthpiece Gap 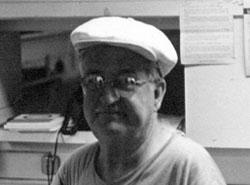 The first time I learned about the gap was on a visit to Elden Benge’s Burbank shop. He explained to me how he made his trumpet play better in combination with Bach mouthpieces, which were popular at the time. He moved the receiver on the horn back until it played the way he liked it. Benge’s goal was to find the gap that worked best, not find out what the gap was “supposed to be.” When I went to work for Carroll Purviance in 1961 he had two shank sizes for his mouthpieces, his standard, and a smaller B shank. Purviance discovered that for some setups, one shank would play better than the other. During that same period I was studying trumpet with John Clyman, who had his own theories about the gap. He believed that there should be at least some gap between the mouthpiece and leadpipe. This was contrary to another theory that suggested that very little, or no gap was best. Clyman would push me to work on mouthpiece projects for him in exchange for the lessons he gave me. He then bought my first lathe (which I still use today) and I opened  up my own shop in the back of my Mother’s house. Opening Up Shop In April of 1968 I opened my shop in Hollywood, California and was fortunate to attract the top brass players in the world. My shop was a sandbox where we would try all the ideas we had on our minds. Some turned out good, some bad, but it was fun and a unique learning experience. My experiences with Benge, Purviance, and Clyman, along with my day-to-day observations of players made me realize how crucial the gap really is.  Discovering the proper gap was a time consuming process, requiring a lot of salvage work on customers’ mouthpieces. I would think that the gap should be increased so I soldered a new shank on the mouthpiece, only to find out that it should be smaller and had to file down the shank, or vice-versa. The Bob Reeves Sleeve System

It only took a few times of going through this painstaking process to figure out that there must be a better way. This planted the seed that grew into my adjustable sleeve system. Thanks to my friends Bill Cardwell and Don Macintosh,  in 1974 I was granted my first patent for the sleeve system.

Originally, I made six different sleeve sizes that allowed a player to adjust the gap within 1/16″. It quickly became obvious that players required further fine-tuning, so I divided the sizes into 1/2 and 1/4 sizes, allowing players to adjust the gap within 1/64″. Due to the limitations of the manual lathe I was using, I could not reliably adjust the gap in smaller increments. Frustrated by this limitation and wanting to make even smaller adjustments to the gap, I turned my attention from the mouthpiece to the trumpet receiver. 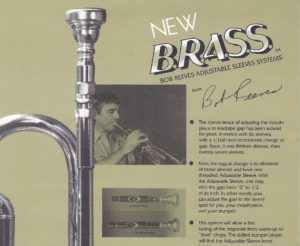 Ad for the B.R.A.S.S. adjustable-gap receiver designed by Bob Reeves – the first of its kind.

n 1979, I invented the first adjustable gap receiver for the trumpet. The gap could be adjusted within .001” by using a precision threaded bit.  Over the next few years, I tested the gap extensively compiling several journals full of notes, observations, and most importantly, players’ perceptions. I was surprised to discover that trumpet players can perceive a change in the gap as little as .006”! I also confirmed my belief that two different players playing on the same mouthpiece and same trumpet often will required a different gap. I converted many trumpets with my adjustable gap receiver (The B.R.A.S.S., which stands for Bob Reeves Adjustable Sleeves System), but there were practicality issues with this system that made me reevaluate making gap adjustments using the mouthpiece. Thanks to advances in machining technology, adjusting the gap by using a converted mouthpiece and removable sleeves became feasible.

The system as it exists today requires a mouthpiece to be converted for sleeves, which is much easier and more economical than replacing the receiver on a trumpet. We can convert any trumpet mouthpiece to accept our sleeves, the process of which does not alter any other part of the mouthpiece — the backbore and overall length of the mouthpiece remain the same. Our removable sleeves come in half sizes, ranging from #1 to #7. We also have quarter sizes available from time to time. The #1 sleeve has the largest shank size, which will produce the largest gap, while the #7 sleeve has the smallest shank size, producing the smallest gap. Learn how to experiment adjusting your gap.
Advice Shop Stories No Comments