Phil Smith Trumpet Interview – The Other Side of the Bell #59

Welcome to the show notes for Episode #59 of The Other Side of the Bell – A Trumpet Podcast. This episode features trumpeter Philip Smith. 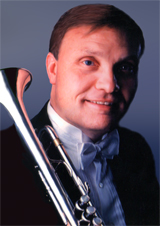 Philip Smith joined the Hugh Hodgson School of Music at the University of Georgia as the William F. and Pamela P. Prokasy Professor in the Arts in August 2014. In addition to teaching his trumpet studio, he is the Bandmaster of the UGA British Brass Band, member of the faculty Georgia Brass Quintet, and coach of the Bulldog Brass Society. This new position follows his retirement from the New York Philharmonic after 36 years of service as Principal Trumpet.

Mr. Smith has also appeared with many symphonic wind ensembles, including the US “President’s Own” Marine Band, the West Point Academy Band, the US Army TRADOC Band, the US Coast Guard Band, La Philharmonie des Vents des Quebec and many major university wind ensembles. He appeared at The College Band Directors National Association Convention in Austin, Texas, for the world premiere of Turrin’s Chronicles (1999) with the University of New Mexico Wind Ensemble. A subsequent recording of Chronicles was produced which included the world premiere of Stephen Gryc’s Evensong (2000) and Turrin’s Fandango (2000). Alfred Cohen’s “curls of motion” was premiered in 2008 with the Columbus State University Wind Ensemble. Aaron Kernis’ a Voice, a Messenger was premiered in 2013 with the University of Illinois Wind Ensemble. 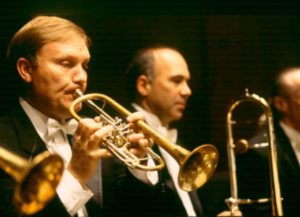 Mr. Smith has collaborated on a series of projects with Curnow Music Press (Hal Leonard), publishing music arrangements with demonstration CDs. These include Great Hymns, More Great Hymns, and Great Christmas Carols for Trumpet and Piano. Two trumpet study books with demo CD have also been produced, Concert Studies and Advanced Concert Studies. In a similar project published by Michael Davis and Hip-Bone Music, Mr. Smith has recorded the 20 minute WARM UP ROUTINE and a soon to be released etude book. Also in this series is Total Trumpet, featuring a variety of trumpet studies demonstrated by Randy Brecker, Jim Hynes and Philip Smith.