Simon Sweeney Trumpet Interview – The Other Side of the Bell #85 Welcome to the show notes for Episode #85 of The Other Side of the Bell – A Trumpet Podcast. This episode features trumpeter Simon Sweeney. 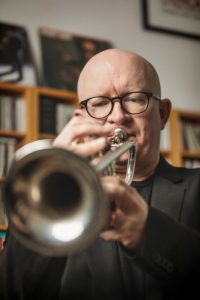 Simon has played on over 40 professional musical theatre productions since the mid 90s. He has played lead trumpet for Michael Bublé, George Benson, Paloma Faith and Tim Minchin. As a jazz musician he has toured and recorded with Mike Nock, played with the Space Cadets, recorded with the Jazzgroove Mothership Orchestra and he is currently co-lead trumpet of the Australian National Jazz Orchestra. He has performed with Silverchair, Thirsty Merc and recorded with Powderfinger and Billy Thorpe.

Simon’s lead playing can be heard on the Netflix series Beat Bugs and Motown Magic. Simon’s own small group jazz album “Emerald City Blues” was released on the Jazzgroove label. During the lockdown he has put together a horn section called the Emerald City Horns comprising some of Sydney’s most prolific studio musicians.