Tiger Okoshi Trumpet Interview – The Other Side of the Bell #62

Welcome to the show notes for Episode #62 of The Other Side of the Bell – A Trumpet Podcast. This episode features trumpeter Tiger Okoshi. 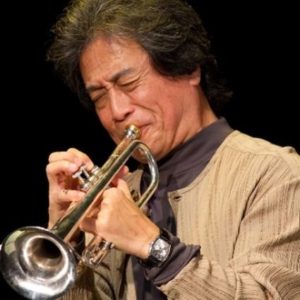 Toru “Tiger” Okoshi was born in the Year of the Tiger on March 21 1950, just outside of Osaka (Ashiya city, Hyogo) As a child he was, in fact, devoted to painting as he loves today. At 13, he had an enlightening experience to see Louis Armstrong Perform live in Osaka, Japan, only 6 months after he begun to play the trumpet. ”He was painting the air with his trumpet” recalls Okoshi. Today, Okoshi often describes the relationship with his horn: “When I play, I want to paint the air with my colorful tone. Choices between long or short strokes, quick or slow, high in the canvas or low, brighter color or darker, with a fat brush or a pen. Paint the air one note at a time.”

In 1972, after graduating from Kwansei Gakuin University with a bachelor of commerce, he married Akemi Usui. They flew to the US to honeymoon, speaking no English. “We took a Greyhound bus across country from Los Angeles, but when we arrived in Boston, somehow we knew that we couldn’t go back.” They decided to sell their return tickets and paid the tuition at Berklee College of Music. Tiger graduated in 1975 receiving the highest honor of summa cum laude. During his 3 years at Berklee, Tiger performed at Carnegie Hall in New York in 1974 with British composer Mike Gibbs sharing the concert with legendary Bill Evans trio. After graduation, he went on the tour with Buddy Rich orchestra. 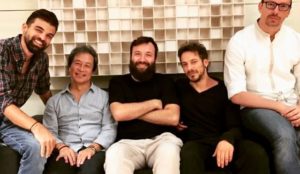 Tiger in Italy producing a CD of a former Berklee student.

In 1977, Tiger received Outstanding Composer & Arranger awards from the Collegiate Jazz Festival at University of Nortre Dame, IN. This award helped him acquire his US Permanent Residence status. Word of his abilities spread in no time. He joined in Gary Burton quartet in ’78 and recorded “Times Square” (ECM, featuring Roy Haynes and Steve Swallow) and toured the world. Keeping Boston as his base, Tiger has been a Berklee faculty member since 1997. 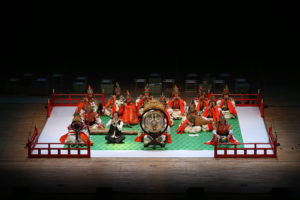 Tiger, who loves sports, was invited to perform “The Star Spangled Banner” at the opening game of the 2007 season between Boston Red Sox and New York Yankees at Fenway Park, as well as the playoff games in 2007 and 2008. Tiger’s trumpet was surrounded by 20 trumpets, 10 trombones and 7 Japanese Taiko drummers playing his original arrangement. In 1997, Tiger recorded a CD entitled “Hustle Tigers” for Japanese major league baseball team Hanshin Tigers.