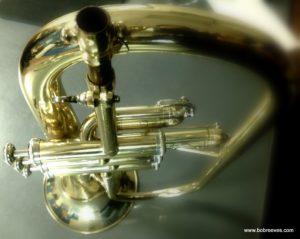 Does your flugelhorn mouthpiece wobble? Do you have problems with intonation, slotting or sound with your flugel?

If you’ve ever played a flugelhorn for more than five minutes you’ve undoubtedly run into a problem involving shanks and receivers. No mouthpiece seems to play or fit correctly and you keep hearing about a “taper” that isn’t a taper — what is going on?

Don’t worry, help is here to bring you your beloved flugelhorn sound!

Though there are many manufacturers of flugelhorns today, there are only three commonly used flugelhorn shanks and one more that is very rare.

The first shank is referred to commonly as the “French Shank” or the “Couesnon Shank.” As you may have guessed, it was used originally on Couesnon flugelhorns. This shank is not a taper, as is used on other trumpet, cornet, or flugelhorn mouthpieces. The bottom inch or so of the mouthpiece shank is cylindrical. At that point the shank flairs slightly into a shoulder which secures the mouthpiece into the receiver. Some folks call this type of flugelhorn mouthpiece shank a French Taper or a Couesnon Taper, which is a misnomer since there is no taper to the shank.

French Shank mouthpieces will not fit properly in other types of flugelhorn receivers.

The second kind of flugelhorn mouthpiece shank is referred to as the “Standard Shank” or “Large Morse Taper.” Unlike the French Shank, the Standard Shank is a traditional taper similar to what you find on trumpets, cornets, and other brass instruments. Many flugelhorns are manufactured today, including Yamaha flugelhorns, that accept this taper.

Standard shank mouthpieces generally do not fit in a French Shank or the smaller Bach Shank receiver.

The last shank that very few flugelhorns accept is actually the same size that is used on trumpet mouthpieces. This setup is used on some European flugelhorns, but it is exceedingly rare.

“What Flugelhorn Mouthpiece Do I Need?”

When you are considering a flugelhorn or a flugelhorn mouthpiece, always check and double check that the parts you will be using will work together. Having an incompatible setup of mouthpiece and receiver will result mouthpieces not fitting properly and poor intonation and playability.

Unfortunately, some people refer to either the Large or Small Shanks as “Standard.” This is because many years ago, the Bach Shank was considered the standard size. Over the last 40-50 years, however, the Large Shank has become much more popular while the Bach Shank waned. There has been a resurgence in the Bach Shank in recent years, though the Large taper size is still much more common. 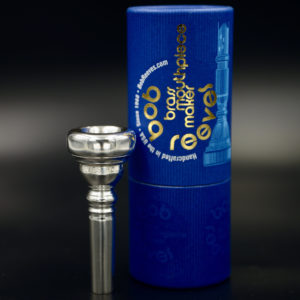 Bob Reeves Brass has a complete line of flugelhorn mouthpieces for all shank sizes of you are looking for a mouthpiece.

You might also consider getting a valve alignment for your flugelhorn to improve sound, intonation, and projection. 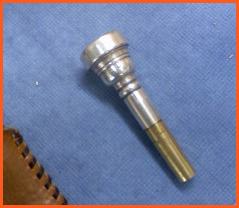 Bud was a long time friend and customer of mine. I had done some work for him before, including aligning his Holton Bb trumpet #516449, when in 1978 he visited my shop. When I asked Bud what I could do for him he said, “I want you to make a new and improved Bob Reeves’ version of my Herrick mouthpiece.” “You got it!” I replied. He was playing a custom Burt Herrick piece (pictured left) that I had altered the shank on before. It was a completely custom mouthpiece – hand carved rim and cup, short length and a complex backbore. It took me most of the morning and afternoon to get the piece done. I was able to modify the piece from the original to give him a little more sound for less work. I had barely taken it out of the silver-plating tank when he grabbed it out of my hand and started running for the door. “I have a session I have to get to. Thanks for the piece!” Bud said running out of the shop. “Hey, don’t you want to take the old one with you just in case?” I yelled out, chasing after him with his old Burt Herrick piece in my hand. I couldn’t believe he would show up to a studio session with a new, untested piece. “What the hell do I need that old thing for…yours is better isn’t it?” I stood there speechless. The session ended up being one of his best recordings with Henry Mancini. He never came back for his old piece, where it has been sitting in the same drawer for 30 years.

We get quite a few calls about threading rims, cups, backbores and underparts. We’d like to take the time to answer some of the many questions we get.

The trumpet mouthpiece is the connecting point between the instrument and player. Due to the unique qualities of each player’s lips, teeth, and jaw structure, choosing a rim is as personal a decision as finding a soul mate…which is why we often tell customers to “marry” a rim if it feels comfortable. Once you find a rim that connects with you, put it on every mouthpiece you own: trumpet, cornet, flugelhorn, piccolo, lead mouthpiece. When you switch from horn to horn, the adjustments necessary to switch are minimized since the mouthpiece feels the same to you. Threading mouthpieces is a handy solution when you find a rim that feels good, but you are not satisfied with the sound or playability of the mouthpiece. This may be because the rim comes off of a piece that wasn’t designed to do what you want. For example, you like the feel of a rim off of a lead mouthpiece but you mostly play orchestral music. Instead of going on a mouthpiece safari trying rims with similar dimensions, cut it off and thread it and put it on a orchestral mouthpiece.

What We Can Do

We can thread any type of mouthpiece using any thread you would like (Reeves threads, Schilke threads, Bach threads, etc.). Most mouthpieces are threaded at the rim so that the rim can be used on different underparts – the underparts consisting of the cup, bore, backbore and shank. While not as popular, we can also thread cups and backbores similar to the Warburton style mouthpieces. It is important to note that when we thread parts and put them together, we are able to maintain the cup depth and other important dimensions of the mouthpiece so that are results are consistent.

An orchestral player was in the shop last week looking to improve his setup. All of his horns have been aligned and he was going back and forth between mouthpieces because he liked the feel of one (a Monette mouthpiece) and the sound of the other (an old Bach mouthpiece). This was the perfect case where putting the parts together would solve his problem.  He ended up with a Monette rim on an old Bach underpart and left sounding even better than when he arrived. If you have any questions about our threading or any other alterations that we do, feel free to send us an email or give us a call!
Bob Reeves Brass In Uncategorized

I received this email the other day and thought I would share. I worked with Carroll Purviance for the last 8 years of his life and this story shows how, despite his personal conflicts, he was a master craftsman and respected by the best players worldwide. I am proud to be able to make his mouthpieces using his original tooling and also integrate his ideas into my own line of pieces.
– Bob Reeves

“Dear Bob,
I happen to be surfin’ the net the other day, and came across your web-site. Having been once a student of trumpet years ago and my best friend’s Dad was a highly respected trumpet player in the Warner Bros. orchestra from the late fifties to early sixties..(Larry Sullivan), thought I would relay this message:
We, as 12 year old boys, would often accompany Larry on brief  trips to the studio in Hollywood or Glendale to have mouth pieces made. I have memories of Carroll Purviance, hunched over his lathe, maybe slightly intoxicated and weeping, talking to Larry about his life. Later, Larry would always compliment us for not laughing or acting up on the way home. He always made it clear though, that Mr. Purviance was the absolute master at what he does, no matter what his state of mind. Nice to know that his name still lingers and represents this.”